If you’ve visited my website at any point in the past, you may have (or at least I hope you have) noticed that it looks a little different this month. In fact, if you’ve visited this site on your smartphone, I hope you’ll notice that it looks a lot different. We’ll get to what is new, and why, shortly. First, though, I thought it might be fun to take a short stroll down memory lane — i.e. the history of this website.

This website made its first appearance back in July of 1996. For the first few months it was purely experimental, investigating the possibility of putting some of my songs on the web with both lyrics and audio clips from my demos. The state of the art for audio back then was RealAudio, with a bandwidth of 14.4 Kbps, which was also the speed of the modem I used for accessing the Internet at the time. I had something like 6 MB (no, the “M” is not a typo) of web space available to me on my ISP account. I had a blue color scheme (because I like blue?), but feedback I received suggested it was kind of cold. As a result, by the time I started advertising my web site a few months later, I’d switched to a warmer gold scheme (for future gold records?). Here’s a shot of that web site from late 1998 courtesy of Wayback Machine: 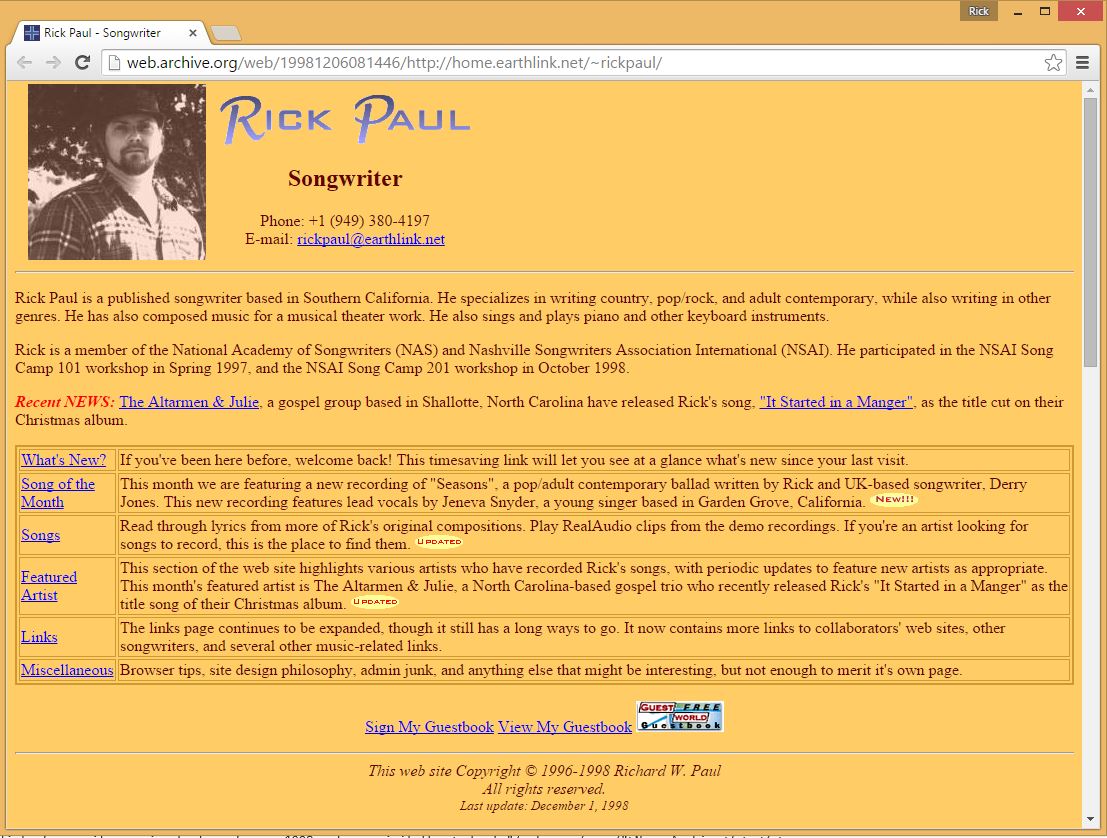 Actually, it wasn’t so much a gold color scheme, but a gold home page. Every page of the website had different colors, with colors selected based on something specific to the page. For example, a Christmas song had red and green text on a white (for snow!) background. I know what you’re thinking — “ugh!” Yep, you’re right, but at least I had more web space — a “whopping” 10 MB, and RealAudio’s bandwidth had progressed to 28.8 kbaud (as did my modem).

I also started a “Recent News” section on my home page to announce the first cut of one of my songs, by a gospel group in North Carolina, for part of my December 1998 update. That section continued as a regular feature of my web site over the years since, albeit sometimes under a different name.

As my music business efforts expanded, I added new sections to the web site, and I found my scheme of putting what was effectively the site’s menu in the body text of the web site limiting. I decided to add a top-level menu, but even that didn’t have enough space to fit everything I wanted to make easily accessible. To address that, I went to a true two-column layout, where the menu items and their descriptions were on the left, and the news section went down the right. As this August 2000 screen shot shows, there had been a number of developments on both fronts: 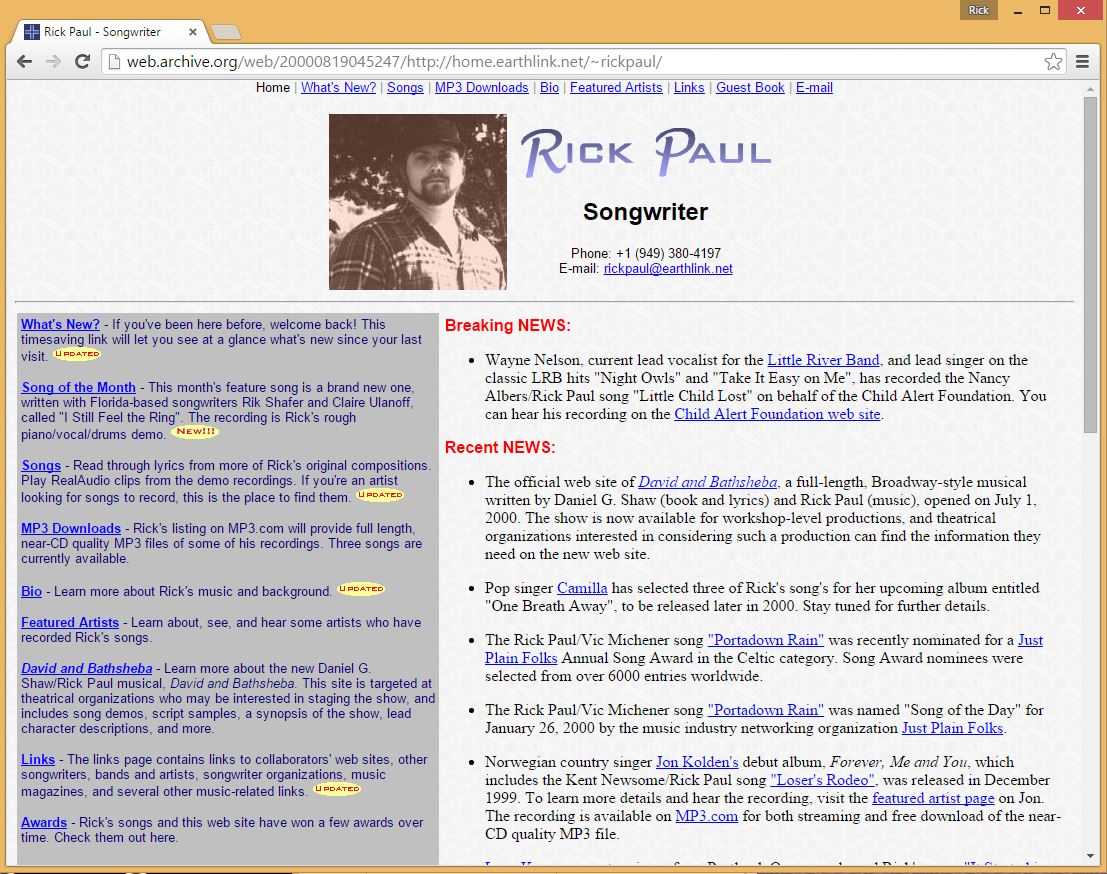 I still have a bit of a soft spot for this layout, which features a textured background to simulate paper (you know, because I am a writer). Though aesthetics and techniques have changed over the years, the two-column layout, with content on the right and menus on the left, persisted through several site design updates.

Can You Frame That?

Around May 2006, I shifted focus from pure “outside songwriting” (i.e. writing songs with the idea that they would primarily get out into the world through other artists’ recording them) to also putting out my own recordings. That shift in direction caused me to start thinking about “image” — i.e. who was I as an artist — whereas I’d previously only been trying to convey the idea that I wrote songs. Honestly, I had no real clue on that front, but I’d named my publishing company Closet Cowboy Music, and many of the songs I’d been writing had somewhat of a country bent. Besides, I’m a pretty casual guy, so I ended up going down the route of trying to convey a blue jeans and earthy colors feel, with a slight hint of the cowboy notion.

Beyond looking at a stylistic makeover, and shifting to my own domain name (rickpaul.info at that point), my website had grown to include a significant amount of content, between songs, information on recordings, and links to other sites where I had content. Every time I added new menu links, there had been many pages where I needed to add those links. To solve that issue, I decided to use frames to allow developing the menu once and just shifting the content as different links were clicked. Frames have since fallen out of favor for web design, but they served their purpose “back in the day”. Here is a January 2012 screen shot from my home page: 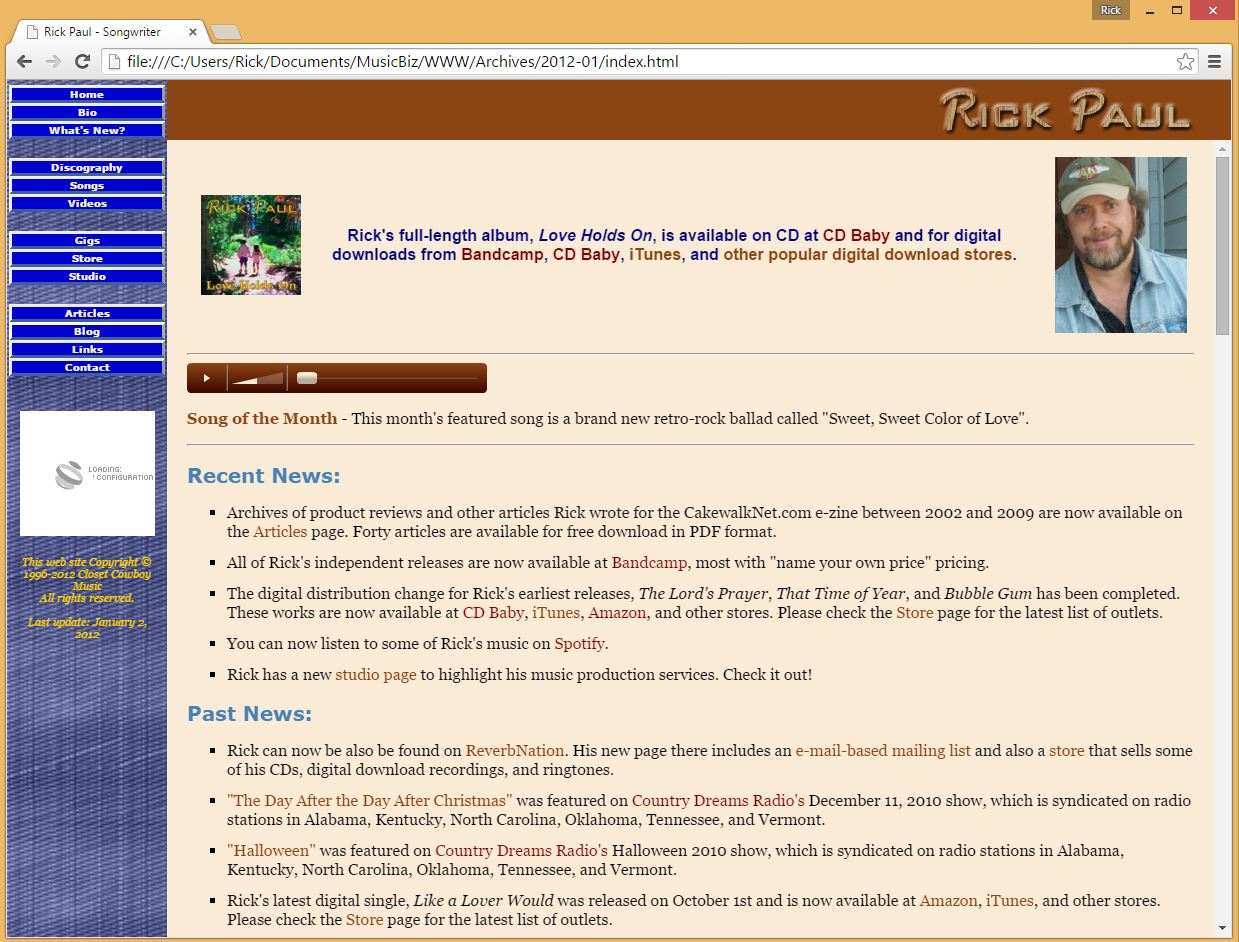 How About a Second Site?

As if I weren’t already stretching myself, and my site, thinly enough, somewhere between 2010 and January 2012 I decided to add a second site focused on recruiting production business. I’d always done some production for other songwriters and artists, but it was more or less “on demand”, not something I’d actively recruited. The new site came along when I still had the frames design going. I went for a different look here, though, to distinguish it from my artist/songwriter site. Here’s a recent screenshot from that site: 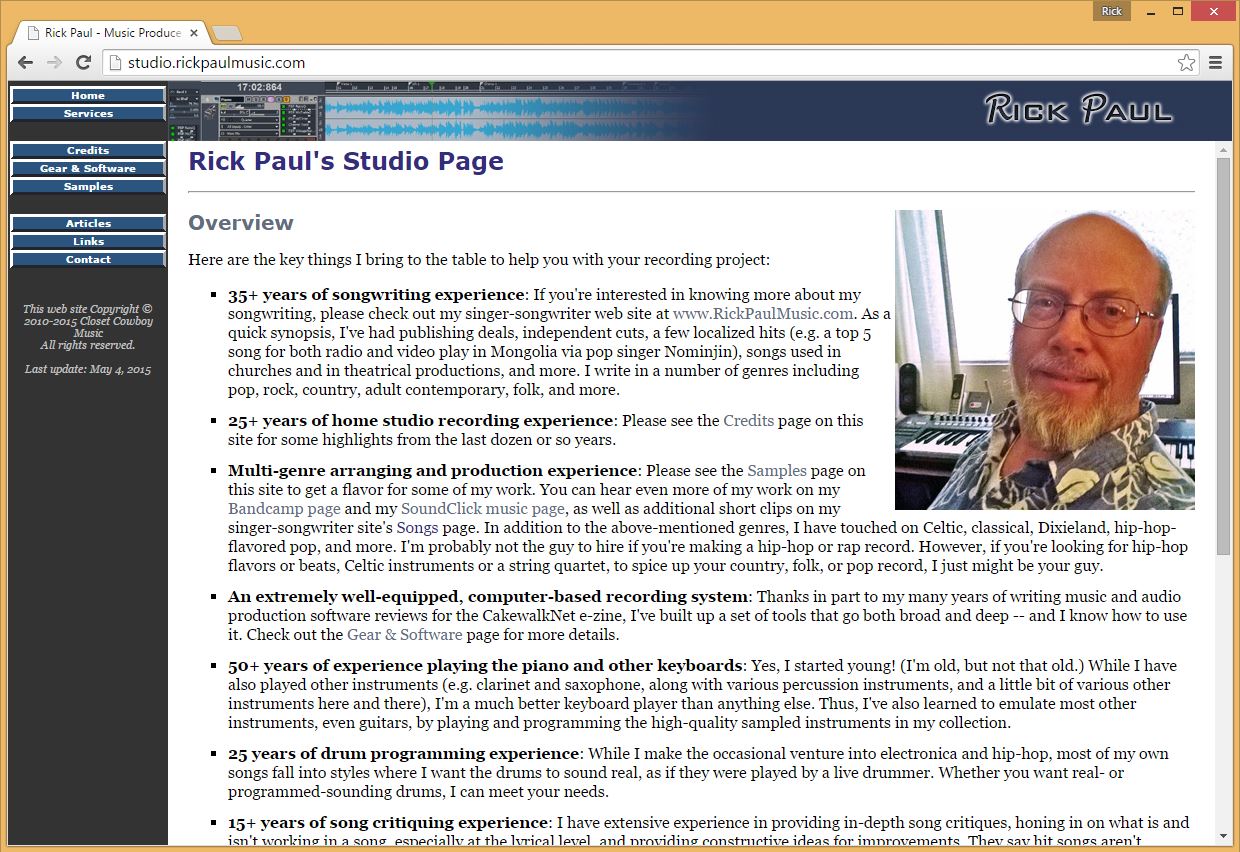 Side note: I recommend never using an obvious “selfie” as a web site cover photo. The original site had a somewhat better photo (at least it was a tripod-mounted camera), but, I did a major studio overhaul during 2013 and 2014, and the original photo was no longer representative of my setup. Beyond communicating a different focus, this site also had several new sections, such as production credits and gear/software lists.

Somewhere alongside all this, smartphones came along, and frames became a real liability. I’d been using Flash-based audio players by this point, too, and the iPhone did not support Flash. As a result, I went through a major web site overhaul to ditch Flash and frames, using HTML5’s new audio feature and getting more heavily into newer web techniques based on CSS3 for dealing with web page sections. My goal at that point was to try and keep the general look and feel of my site consistent with the frames-based look, but making it work with the newer technologies. The only problem was I didn’t have access to a smartphone myself until much more recently, so I only had the word of others who had checked out my site on their iPhones and told me it looked good on there. In reality, once I got my own smartphone (I’m in the Windows 8.1 Phone camp), I found it looked like a miniature page with text that was way too small to read without zooming in, and links that were hard to use. It did at least play the audio, though. Here is a screen shot of my site just before the current design overhaul: 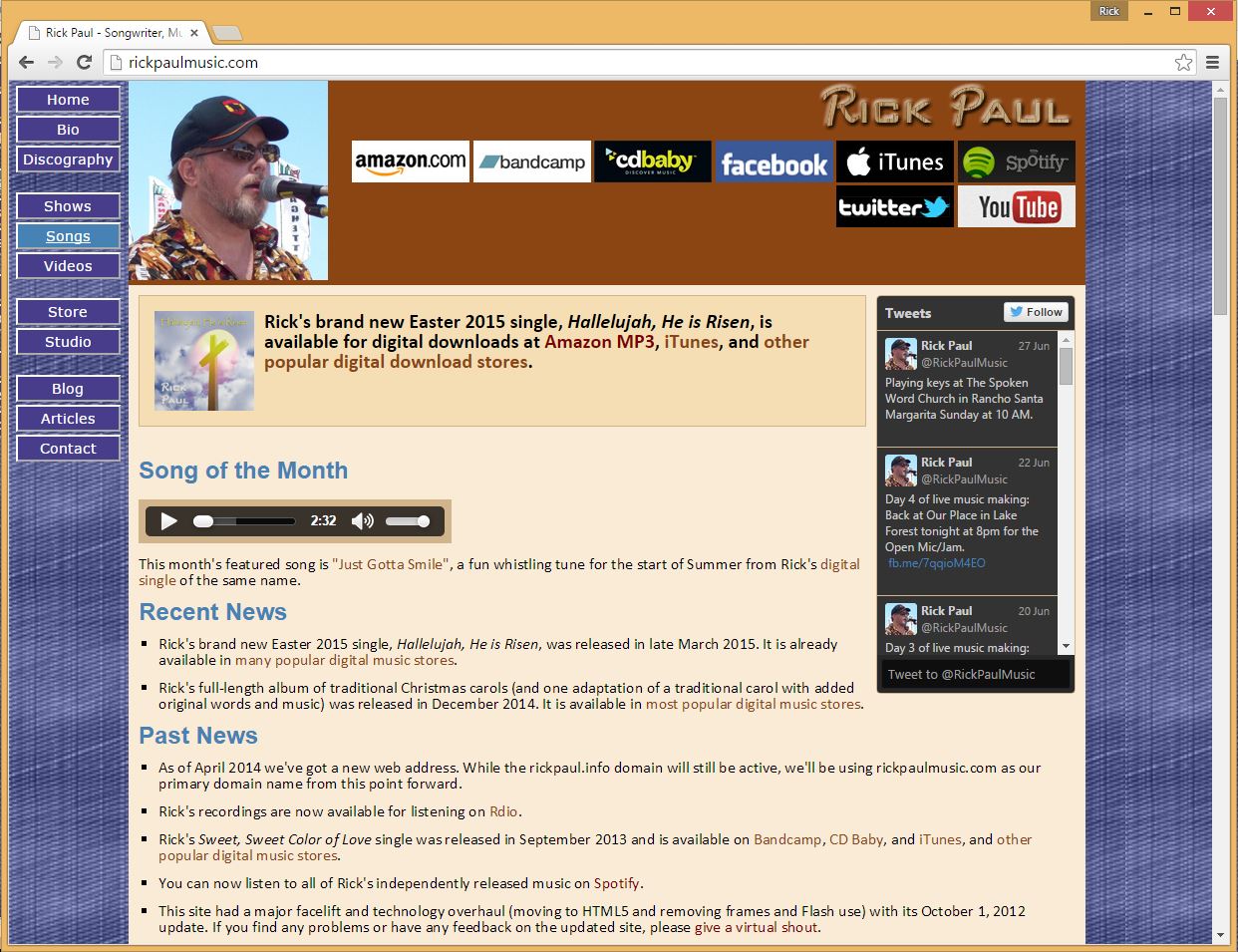 Another thing you might notice from this shot is it really played up integration with social networking sites and online music stores, albeit at the expense of having the header look a bit like a highway lined with billboards.

For some time now, I have been considering making my web site mobile-friendly, knowing that many more people access the web from their phones these days and having seen for myself how difficult some web sites that looked good, and worked well, on a computer could be to use on a phone. When Google recently announced they’d be penalizing non-mobile-friendly sites in their mobile search results, I decided it was time to start on an overhaul. Having already designed a mobile-friendly, WordPress-based website for one of my day job clients, I was initially thinking it would be a fairly quick project, picking templates, converting content, and tweaking until I was satisfied. Wrong!!!

Instead of the few days to a couple of weeks I’d originally estimated, the combination of lots of intervention by Murphy and “feature creep”, not to mention the day job, playing out, and needing to sleep occasionally, made the project take almost exactly two months of elapsed time. However, the result is a much more functional site that combines both of my earlier sites’ main content, plus content from a separate blogging site, under one roof. Just going through 17 years’ worth of content to check and fix or remove outdated links was a major consumer of time. Beyond simply merging the content from multiple sites, there is new functionality, both behind the scenes (e.g. for entering venue and show information, automatically sorting posts, etc.) and at the user interface level (e.g. map links for show venues, site-wide searching, etc.). 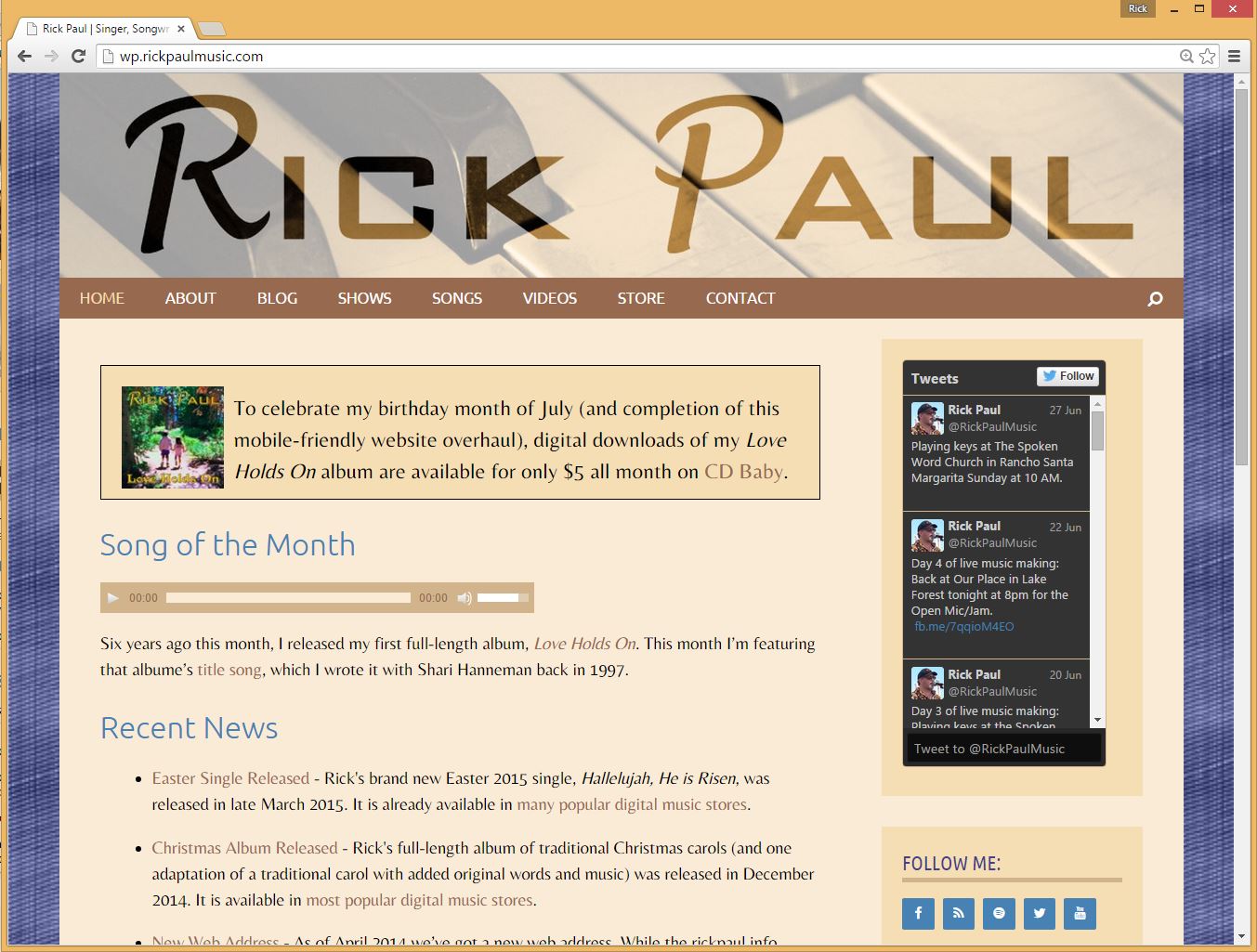 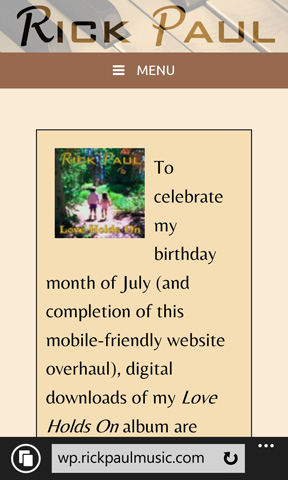 While the overhaul took way longer than initially planned, I believe the enhancements will make the site easier to update and easier to use going forward. They should also provide the potential for adding additional high-level features in the future, such as integrating some of my photography. But those types of considerations are for somewhere down the road. For now, it is time to launch this “Version 5.0” website. I hope you’ll enjoy it.

P.S. – If you’d like to be informed of new posts (e.g. blog entries, news, shows, videos) on this site and you use an RSS reader such as Feedly, you can subscribe to this site’s RSS feed via the link in the “Follow Me” sidebar. I still intend to update the site monthly, but the new format may also mean some new information gets posted more frequently at times.